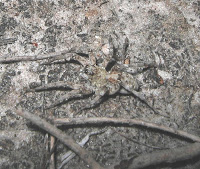 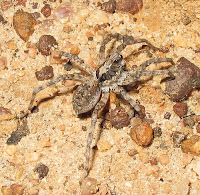 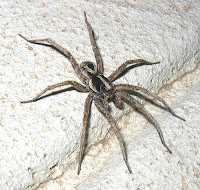 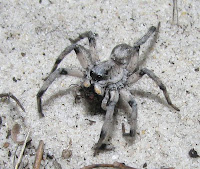 A Wolf Spider is so called, because it hunts like a wolf by selecting its prey, then running it down. Many are large powerful spiders and occur throughout Australia. They are not aggressive to humans and although they can give a painful bite, are not regarded as dangerous and few people are bitten. The feature they are most easily recognised is their eye arrangement, with two large forward facing eyes. Another two (not quite so large) are further back and peer upward. Plus there are another four much smaller eyes in a horizontal row below the large ones. The two large eyes brightly reflect the beam of a torch, so these spiders can be located by spotlighting at night.

Lycosidae is a large family of spiders, made up with over 150 Australian species in 23 genera, of which WA has around 50 species. Besides the common Hogna species above, they are represented by the novel ornamentation of their burrows, which I suspect many species are very habitat specific and unless you seek them out, they are not likely to be encountered.

Species in the drier Esperance region, probably spend more time in their burrows than in the SW of WA or the higher rainfall regions in the Eastern States. Other than the restrictions of a drier climate, spiders do not have to hunt regularly as a single meal could sustain one for weeks, in which case the skilled Wolf Spider hunter could probably remain in their burrows for much longer periods. In order to determine whose burrow belongs to what spider, I have had to tempt some out to see who lives there. This I do by gently lowering a fine soft stem of vegetation (leaves removed), preferably with a small (fly sized) flower on the end. Often the spider will seize the flower and a tug of war will ensue. Slowly the spider can be coaxed up the burrow to the opening where if you are quick and the spider slow, get a photo; but more often the spider is much smarter than you had hoped and you get nothing. 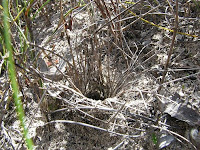 An interesting burrow entrance constructed of fine dry vertical sedge stems to form a picket type fence. This is strongly bound together by several layers of silken thread. The top is very irregular and can reach over 8 cm (over 3") in height and around 2.5 cm (1") diameter at the base. I have only encountered these structures in sandy soils and particularly in stabilised alkaline dunes. I would imagine this fence like structure would deter predators like large centipedes and scorpions, plus reduce wind-blown sand entering the burrow. 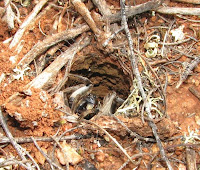 At first I though this burrow might belong to one of the primitive spiders, but the Wolf Spider inside was very cooperative and eventually came to its entrance. It was one I had not seen before, having large soft brown blotches over a pale grey body and legs. The burrow was around 3.5 cm diameter (11/4") without ornamentation and descended vertically through a hard sand/clay soil overlying granite. If the spider had dug it, it would have taken a great deal of work, or perhaps it took over one dug by something else (like a large Swift Moth larvae), as they are known to do. 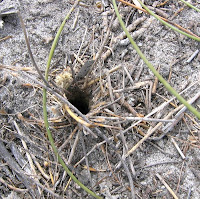 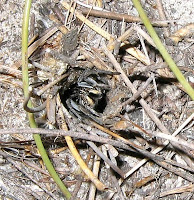 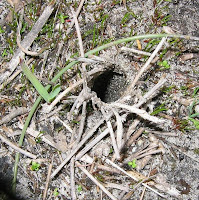 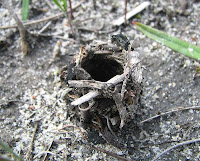 The burrow ornamentation of this Wolf Spider's entrance stands as a solidly constructed vertical tube of around 5 cm (2") by 3 cm (over 1") diameter. It is more commonly found in flat ground that may experience shallow surface flooding during heavy rainfall. The structures can be found in sandy heath and also in the heavier clay soils of the inland mallee, although possibly belonging to different species. Some spiders will construct a fine web in the tube that is claimed to indicate the female has mated. This may be so, but it would also increase humidity within the burrow and probably discourage predators.