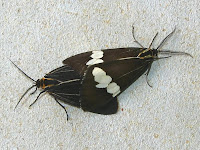 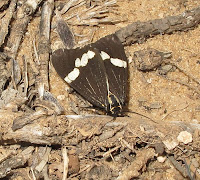 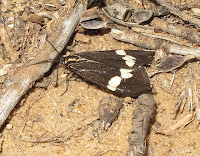 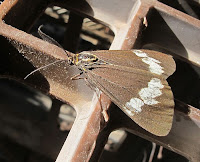 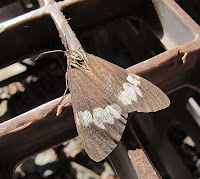 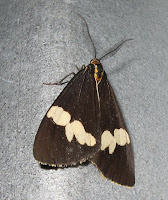 
This moth is part of the Arctiidae family that are commonly known as Tiger Moths due to their striped abdomen, which in this instance is black and yellow. This particular species is called the Senecio Moth (Senecios are a daisy), because their larvae apparently only feed on these plants and specifically S. cruentus, S. linearifolius, S. mikanioides, S. quadridentatus, and S. scandens. Only Senecio quadridentatus occurs in Western Australia and I have a small persistent colony growing around Banksia speciosa near me, which is why I have the Senecio Moth here.

The Senecio species the larvae feed upon contain pyrrolizidine alkaloids, which are produced to stop insects from eating them, but obviously this moth's larvae has adapted to tolerate this poison. However these alkaloids also make the larvae poisonous or highly distasteful to predators like birds, which apparently extends to the adult moth as they can fly around during the day without incurring bird attacks.

According to the Lepidoptera Butterflyhouse Website the Senecio Moth is not found in WA, but I have records going back 5 years for Nyctemera amicus, which indicates it has been around locally for a while. The moth is around 2 cm (3/4”) in length (excluding antennae) and can be seen anytime of the year, but these sightings are probably because locally, this Senecio is only found around me and only elsewhere after fire and even then is quite rare. So my sightings although reasonably common, may not reflect the population density elsewhere in WA, as locally the moths must return in order to reproduce.

Posted by William Archer at 4:43 PM