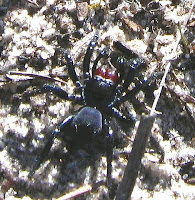 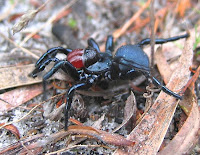 
Although a ferocious looking spider with huge chelicera (the organ that supports the fangs and channels the venom), the male is surprisingly small, with most being little more than 10-15 mm (1/2") in length (excluding legs and palps). The female on the other hand is much larger, particularly in stature, to reach over 30 mm (11/4").

There are currently 10 described species from this genus with at least 6 living somewhere in WA (only two species are known from the Esperance region). I have only encountered a single specimen of the species above, which was wandering around (did not stop moving) in the middle of a sandy track around 11 am on a bright sunny morning. Unfortunately with the light reflecting off the sand and the spider constantly on the move I did not get very clear photos, but they do show the bright red chelicera. Red in nature usually means 'beware I am dangerous and/or poisonous,' which is a warning to predators like birds to leave them alone, so these spiders can safely wander around during the day when most other species would be quickly eaten.

Male mouse spiders have a deservedly bad reputation for the potency of their venom and although there are no known deaths attributed to this spider, a number of people have been made very sick, particularly young children. The female mouse spider is completely black with no red markings and digs a very deep burrow (a metre or so (3-4 ft) and very rarely leaves it other than to grab passing prey. Their common name of Mouse Spider relates to the similar size (diameter) burrow dug by the introduced mouse, Mus musculus. I have seen female Mouse Spiders in the Eastern States, but not in WA. They are notoriously difficult to find as the burrow is usually well disguised and often has two entrances each with a trapdoor. The male is not so fussy and will often shelter under rocks, logs, etc.

The WA Museum thought the above spider might possibly be Missulena granulosa, which is apparently common in southern WA regions. The photo was taken in mid-August in a deep white sand and heath habitat, dominated by Banksia speciosa.

Update 23/06/09
A much better photograph of the male Mouse Spider was added, thanks to Brett and Sue Coulstock of Albany WA, who took it on the Torndirrup Peninsula. Interestingly, it too was wandering around during the day (11-30 AM) on a sandy track and was constantly on the move. Many thanks Brett and Sue.

Posted by William Archer at 5:07 PM