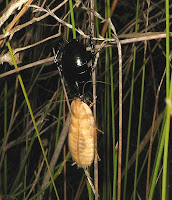 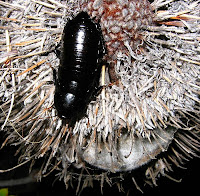 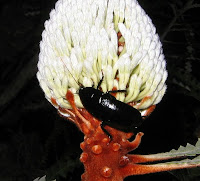 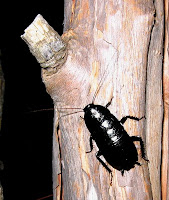 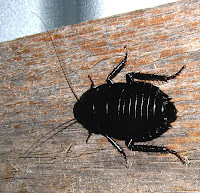 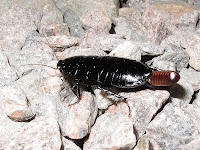 
Although this Black Cockroach has long been a member of the Blattidae family, the same thing cannot be said for its genus, as some species have been moved around 5 or more times. Mostly they have retained their species name, but with this one known as Cutilia nitida 100 years ago, have in more recent years disappeared off the radar and despite extensive searches I have been unable to find it again. It seems you need to be very well acquainted with cockroach taxonomy to appreciate what has been happening with them.

However, the Black Cockroach around Esperance is very common, particularly in sandy heath. They only come out at night and although far from being in plague proportions, are often the only invertebrate encountered. Nevertheless, they are an important food source for many animals, particularly frogs, which in turn provide sustenance for other predators like reptiles, so locally these cockroaches are a key feature in the heathland ecosystem.

Occasionally they do enter houses, but are not dirty or become a pest; they just go about their business feeding on dry, slowly decaying organic matter (detritus). In the bush they are mostly found on dead vegetation from near ground level to high in trees or tall shrubs, where they sometimes dine on live flowers.

Shown above is a female carrying her egg case (ootheca), which she will hold for some time before dropping it somewhere, hopefully for the young to hatch and mature, but this they do without any parental assistance. Also shown is a moulting Black Cockroach, which initially is not only soft and very vulnerable, but pale and very noticeable, requiring a safe location to perform this function and still survive.  A mature cockroach is quite robust and around 4 cm (13/4") in head/body length.

Posted by William Archer at 3:27 PM