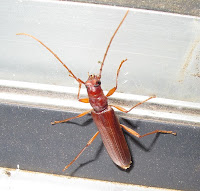 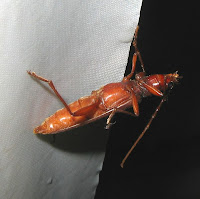 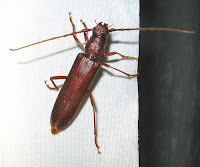 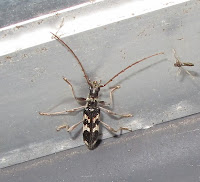 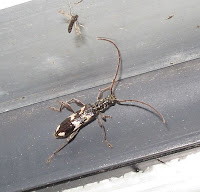 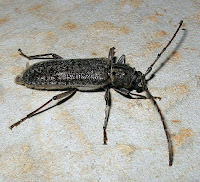 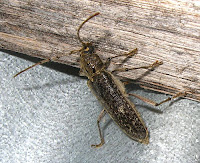 
Cerambycinae is a subfamily of the Longicorn family Cerambycidae and is most obviously separated from other subfamilies by having a forward facing head (not sharply deflexed), a stridulatory file for making calls and long slender legs, of which the hind ones are longer than the mid legs. Apart from the Uracanthus genus, most other species have parallel sided elytrons (hardened forewings).

Many members of this subfamily are on the lower end of the longicorn size range, but what they lack in size they often make up with brighter coloration. Although the larvae bore into living or dead wood, some adults feed on flowers and can be important pollinators by carrying pollen from one plant to another. A characteristic of most Longicorn Beetles is a slender body with long antennae and in some places they are known as Longhorn Beetles, which is the English translation from the Latin Longicorn.

When spitting timber, it is not unusual to encounter bored out tunnels coming to and abrupt end; this is the sign of a Longicorn Beetle. For as they slowly burrow by feeding on the host tree timber, when ready to pupate they simply stop eating without making any attempt to construct an outlet for the adult to escape. The surrounding timber will however protect the developing beetle from predators and extreme temperature changes including most bushfires. To escape, the timber waste created by the larvae during its boring activity accumulates at its rear thereby creating a protective plug, but that is easy for the adults to tunnel through with their large mandibles.

Longicorn Beetles are most active at night during the warmer months, particularly if humid or when rain is expected. To see what species are in your area, most of these beetles are attracted to house lights, so it is a simple matter of periodically checking external lights for new arrivals.