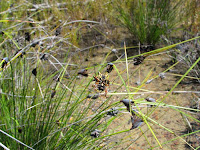 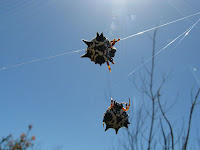 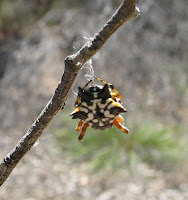 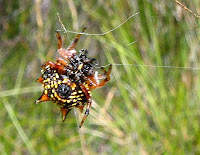 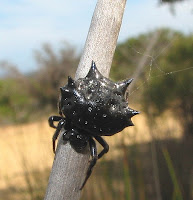 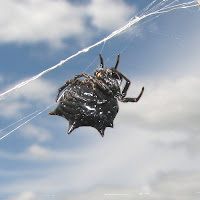 
This orb-weaving spider from the Araneidae Family was previously known as Gasteracantha minax, but has now been placed back into its original genus (first described in 1859), where it is the only species. Christmas spiders, so named for the time of year they normally make an appearance, range across the southern and eastern regions of Australia, where they are also known as Jewel Spiders, Six Spined Spiders or Spiny Spiders.

These spiders can occur in huge numbers and string their vertical webs between low shrubs making it impossible to walk through parts of the bush without becoming covered in their webs. Fortunately the spiders quickly drop to the ground as you make contact and if you walk slowly, they will see you coming and scamper upside down along their support lines to avoid a collision. However, they are only small (females to 8 mm, or little over 1/4” head/body length, males are half that size) with tiny legs making their progress correspondingly slow.

Their markings are multi-coloured and certainly jewel like, however this stage is mainly from December to February, when later arrivals lack any markings and are a very dark brown to black. This change takes noticeable pace from the beginning of March until they disappear around the end of April. A possible reason this color change is the better heat absorption of dark colours during the cooler autumn season, but this is purely speculation and currently just an observation.

Posted by William Archer at 4:02 PM