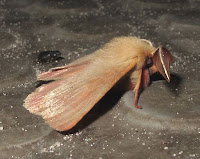 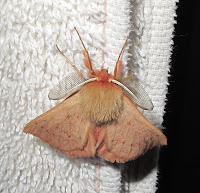 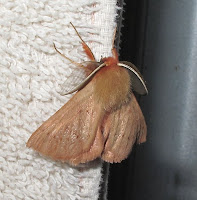 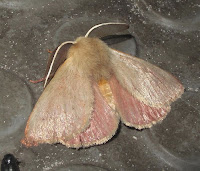 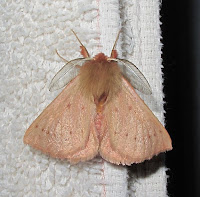 This WA species also looks similar to Anthela ferruginosa (once placed in the Pterolocera genus), but this species is apparently restricted to NSW, ACT, Victoria and Tasmania. Another problem taxonomists have had with classifying these moths is they are highly variable in coloration and markings, so it is wise not to be too pedantic in this regard. I have included a caterpillar photograph that I suspect is the larval stage, due to the scruffy hairy nature and markings (particularly the bold vertical stripe on the head). The larvae feed on low bushes and apparently pupate in the ground, their hairs projecting through the cocoon, which if handled can penetrate the skin, then break-off to become very irritating.

Pterolocera elizabeta is about 2 cm (3/4”) in head/body length and apparently prefers the cooler part of the night, which again matches the above moths that appeared around midnight after rain, during February and March. Both were attracted to house lights and if this is a species characteristic, then they are not overly common around the Esperance heathland as only a few have visited.
Posted by William Archer at 5:27 PM