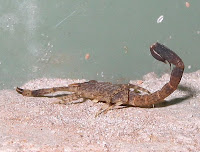 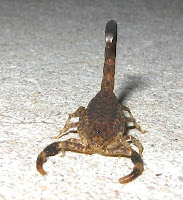 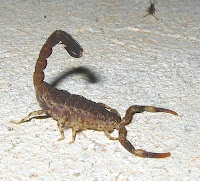 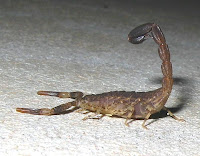 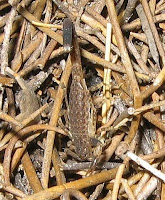 
This is a slender scorpion of around 4 cm (11/2") in length and liberally covered with small dark flecks, juvenile ones remind me of a scampering matchstick, such is their slender physique, whereas the more mature get the middle-age spread and look more like a typical scorpion. They are quite common in the Esperance region and being small will fit easily under doors to enter houses, although they are not aggressive unless handled and will only be seen as they scurry off to a dark place in which to hide.

Many years ago I was stung by one of these scorpions and felt the pain instantly, which was similar to a bee or ant sting and lasted for a couple of hours. This reaction is apparently the norm with these animals and they are not regarded as being dangerous to humans, but as some people are allergic to bee stings, it is best to be on the safe side and not get too close. There are only two families of scorpion recorded for Australia and the Marbled Scorpion belongs to the Buthoidea family, which (overseas) contains the most deadly. These are known to cause human fatalities, but this does not apply to the Australian members, however they should be handled with respect.

The Marbled Scorpion is common to the deep sandy soils dominated by Banksia speciosa and other heathland shrubs, where they shelter under leaf-litter and loose bark. They probably frequent other habitats too, but as they are small and can readily hide, I have not observed many elsewhere. As scorpions are major predators in the invertebrate world, then presumably this species would be likewise, but would tackle the smaller species of a similar weight ratio.
Posted by William Archer at 6:37 PM