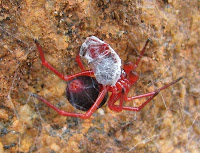 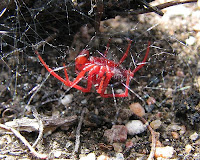 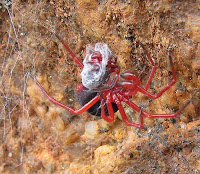 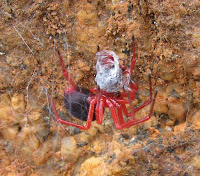 Not so long ago there were only five Australian Red and Black Spider species, but from those few arachnids and with microscopic study, particularly of the genital region, they have multiplied now into 29 species in 9 genera. Not only that, but they have been removed from the Theridiidae family and placed into their very own, Nicodamidae.

These Red and Black Spiders were often known by a single species Nicodamus bicolor, but that species name has been changed to Nicodamus peregrinus, and now restricted to the Eastern States. The name N. bicolor has been scraped all together. This example I think illustrates the problem with spider identification of how different species can appear the same, requiring microscopic examination to separate them.

As you will appreciate, it would be pointless for me to speculate on the species photographed, or to even place them in a genus, but the following three species from the family Nicodamidae are the only ones recorded for WA and one of them probably represent those in the photos above. These are: Ambicodamus kochi, Ambicodamus marae and Nicodamus mainae. They were photographed in the mallee approximately 140 km NE of Esperance; here they appeared reasonably common and were found at the base of rocks and under dried animal dung.

A characteristic of these spiders is they sit upside down in their open web, with numerous vertical threads attached to the ground; these have several droplets of a sticky fluid at their base. When an invertebrate wanders into one of these threads, it becomes stuck to the droplets and when it struggles the trap-line (which is in tension), breaks at the base and the trapped animal is lifted off the ground, when it continues to struggle, it becomes stuck to other lines that do the same, permitting the prey to be reeled in.

These spiders are quite small with a body length of between 4-8 mm (3/8"), but more than make up for their lack of size by their bright red coloration. Because of this, they have immunity from most predators, warning them to leave them alone as they are dangerous, poisonous or both, and so if needs be, they will venture about during the day. However in the photos above, it looks like a Red and Black Spider (probably a male) has been caught and is being feasted upon by another, so they are not safe from all predators.

There are no recorded ill effects from the bites of these spiders, but now with so many different species, there may be some with a venom toxic to humans, so it would be wise not to take chances, particularly with these vivid red species as they are usually brightly colored for a reason.

Posted by William Archer at 3:43 PM