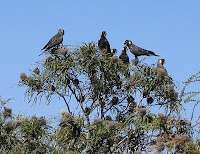 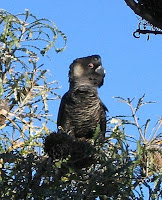 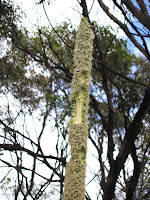 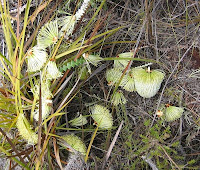 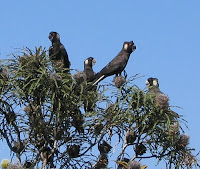 
This cockatoo is the only indigenous species in the Esperance region where it is reasonably common. Maturing to over 60 cm (2') in length, it is one of the largest of the cockatoos and often found in a collection of family groups of 10 to 100 birds, but I have been fortunate to see a flock of over 300 travelling together, and each with a wingspan of over 100 cm (3'), the sky was literally black with them. A visit from these birds (even when only a few) never go unnoticed, as they always announce their arrival with raucous screeches of delight and then continue to loudly vocalise any minor disagreement.


The large flock I saw had come to feast on the seed of opened Banksia speciosa cones recently burnt in a bushfire. This was obviously very good tucker, plus they did not have to open the cone valves with their beaks (although they are more than capable of doing so). There were birds hanging on the denuded branches pulling the seed from the cones, plus others on the ground picking up those that had already fallen. After consuming all readily available seed, they would move 30 or so metres to further demolish a new patch of burnt banksia.

Despite this broadscale attack on the banksia seed bank, there was obviously more than enough as they returned for several days until there was not sufficient for such a large flock, when they then split into several smaller ones of between 50-100 birds to disperse. Over the following few weeks one or more of these flocks would return to pic-over the burnt area, but would soon move off to the more numerous unburnt banksias to forcibly extract the seed using their powerful beaks.

These cockatoos are a common visitor to the Banksia heath region, but do not remain long in any one area, seemingly to be constantly on the move from one feeding ground to another. They need large tree hollows to breed, so the Esperance region with its small tree species is not suitable and I think they may move inland (50-200 km) to the larger trees of mallee areas. Exactly where they nest, I have no idea, but I would be surprised if they all flew 500 or so kilometres to the Demark region (nearest coastal big tree location to Esperance).

Pine trees are very popular with these cockies and there are few farmer's windbreaks with them that do not have large amounts of shredded cones lying on the ground below. However seed is not their only food, grubs make a substantial contribution which they locate under the tree bark and also inside the banksia cones and flowers. This might help explain the mass destruction of flowers and the littering of cones with very little evidence of seed extraction that accompanies their every visit.

I suspect much of this bird vandalism is actually the young birds practising while waiting the return of mum/dad who dump them in a banksia whilst they go off hunting and gathering. Regardless of the apparent devastation, it is never sufficient to cause any real damage and the banksias carry on as if nothing has happened. However if you were a commercial banksia grower, you would not welcome these otherwise delightful and spectacular birds.

Posted by William Archer at 7:09 PM