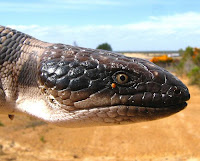 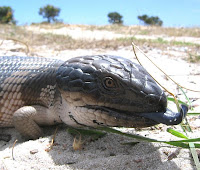 
Of similar size to the Shingleback Lizard, but nowhere as common in the Esperance region and mainly found on or around granite outcrops. This is strange because a similar lizard in the eastern States is quite common, even within built up areas. I strongly suspect the fox and feral cats are to blame along with limited habitat for them to safely retreat.

When confronted these blue-tongued skinks really put on a show by standing their ground and flattening their bodies to make them look bigger, plus hiss and open their substantially wide mouths to show their flashing blue tongue. However this is all bluff and only effective if they spot the predator before they pounce. I would think these lizards would be more palatable than the more common and related shingleback lizard and would be liable to higher predation.

The Western Blue-tongue Lizard is not likely to be confused with any other lizard along the south coast of WA. The combination of a flat blue tongue, large size, plus several pale/dark bands around the body are unmistakable. They are very adaptable as to what they eat and will consume almost anything that will fit into their cavernous mouths; this includes flowers, fruit, invertebrates and small vertebrates. They have very strong jaws, so keep fingers away from their mouths as they can easily crush snail shells. For more information about this lizard and comparison with the eastern species, go here:
http://natureitems.blogspot.com/search/label/34.%20%20Western%20Blue-tongued%20Lizard
Posted by William Archer at 6:02 PM