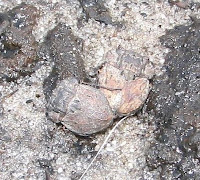 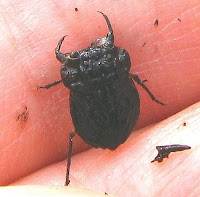 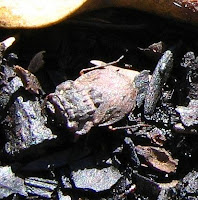 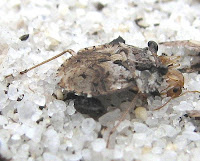 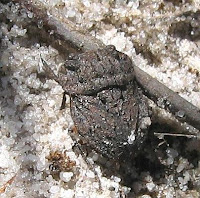 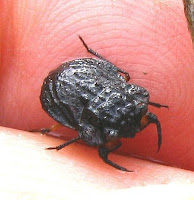 Toad Bugs are small (between 0.5 - 1 cm or around 1/4" in length) and mostly live near aquatic habitats, but some can live in much drier environments. They belong to the worldwide Gelastocoridae family, which has over 100 species in three genera, but in Australia there is one subfamily (Nerthrinae) with only one genus (Nerthra) containing 21 species. I do not know if I have photographed (above) one of more species (I suspect two), but the five in the SW of WA are Nerthra adspersa, N. femoralis, N. hirsuta, N. stali and N. tuberculata, should anyone be interested in following them up.

Despite their small size these bugs are ferocious predators, by ambushing, running down, then pouncing on their invertebrate prey. They grasp their captives in their modified claw-like front legs and then immediately begin to siphon their soft inner tissues. I have seen them hunting ants in this manner (photo center right above), where the bug has been surprisingly fast and agile, with capture happening only a second or two from when the ant was first spotted.

The Australian Toad Bugs are very common, particularly around swampy habitats with a sand or peaty topping, permitting sub-surface moisture to spread out over the surrounding area. Here the majority of bugs hunt, but remain largely motionless or move slowly unless something of interest passes by. Their dull coloration means they blend perfectly into their environment and are seldom noticed unless they move, even then you need to be alert. They also wander around in dry sandy soils on sandy hillocks well away from water, where they live under leaf-litter, rocks, logs, or simply bury themselves in the sand.

Despite their aggressive hunting methods and powerful front legs, I have never been attacked, let alone nipped, even when I have picked them up, so fear not for your little pinkies, they are quite safe in their company.

Posted by William Archer at 5:55 PM