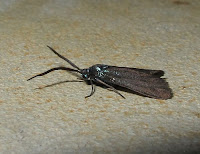 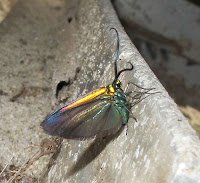 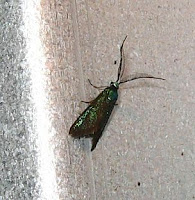 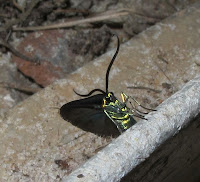 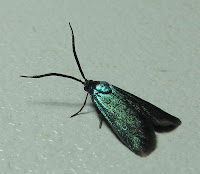 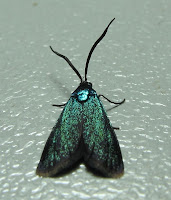 
Forester Moths are small moths, with bright metallic coloration that will flash when viewed from certain angles. They are mainly active during the day and probably use their colours to warn predators like birds of their poisonous nature, which as adults they produce cyanide especially for this purpose. Pollanisus is the largest genus in the family Zygaenidae, with 20 described species (Australian Faunal Directory) that when combined with 9 other family genera currently bring the total number to 43, although many others remain undescribed.

Despite being active during the day, they can also be attracted to light at night, where due to their small size (5-8 mm (1/4”) in head/body length, they may be more easily spotted. In WA there are 4 known Pollanisus species: P. acharon, P. cupreus, P. empyrea and P. nielseni, so presumably the photos above would illustrate one or more of these species.

These moths are not common, but will turn up on certain warm, calm nights between September and April; mostly they visit in ones and twos, but occasionally over a dozen will appear. And being so spectacularly coloured are always a welcome sight.

Their larvae apparently show a preference for Hibbertia spp. (Guinea Flowers) that are very common in the Esperance district in both number and diversity. The caterpillars are hairy and feed only on the upper leaf surface to leave characteristic tracks (Zborowski and Edwards – A Guide to Australian Moths).

Posted by William Archer at 8:05 PM