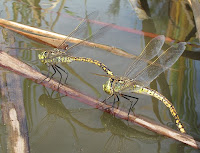 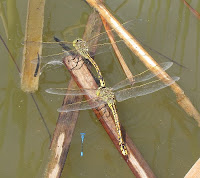 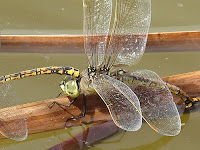 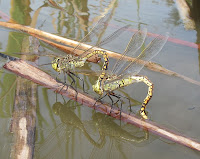 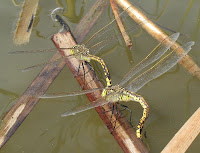 The Australian Emperor Dragonfly is the largest I have seen in the Esperance region, having a head/body length of around 7 cm (3”). As a size comparison, hovering over the egg laying Emperor Dragonfly couple above, is a blue damselfly Austroagrion cyane, the South-western Billabongfly. Although not uncommon, Hemianax papuensis are continuously on the move and can be very difficult to photograph, even when they do rest, they take-off long before you can get close. Being exceptionally strong fliers they can be found throughout Australia, plus New Zealand, New Guinea and many Islands to the north of Australia.

Hemianax papuensis is the only Australian species in the Hemianax genus, which in turn belongs to the Aeshnidae family along with 6 other genera and 13 indigenous species, however none are endemic to Australia and like the Australian Emperor are distributed over a large area, some as far as India.

Locally, Hemianax papuensis favours slow streams and still waters, providing aquatic vegetation is available. Near me is a small dam with plenty of surrounding vegetation, but it had no aquatic plants, so I collected several Bulrush tubers from the creek and planted them into the dam 3 years ago. Only one tuber survived, but has done quite well and now there are around 30 rushes poking out of the water, which are perfect for the damselfies/dragonflies, with several having taken up residence and others visiting, thereby increasing biodiversity considerably.
Posted by William Archer at 4:28 PM