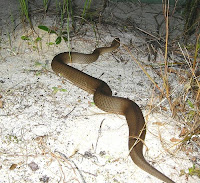 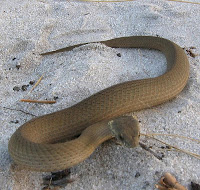 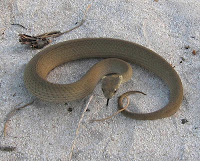 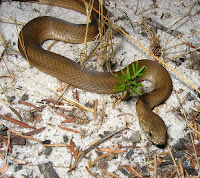 
Very rare in the Eastern States, but reasonably common around Esperance and most active during spring, early summer and if summer rain, during summer and autumn too, although being nocturnal it is not commonly seen. It occasionally comes out on overcast days or in the morning or evening, but night time is its normal period of activity. It is a small stocky snake (to 2' 6" or 710 mm) with a broad head and often showing a raised keel along its back. Commonly grey to rufous brown and sometimes with small darker flecks. Around the mouth and neck there are often noticeable white scales.

It is usually found motionless and waiting in ambush to catch frogs and lizards, although will take any unweary passing vertebrate. If not harassed it will remain immobile for an hour or more and seems to have a particular prey in mind by positioning itself where its potential prey visits on a regular basis. However, if interfered with, it has a ferocious temper and can be very aggressive, striking repeatedly. Although venomous and known to cause unpleasant symptoms if bitten, it is not regarded as deadly and unless you go out of your way to harass this snake, you are very unlikely to be bitten. Like all snakes, treat them with respect and let them get on with their business, because they are not interested in attacking you, but will do so in self-defence.
Posted by William Archer at 6:23 PM