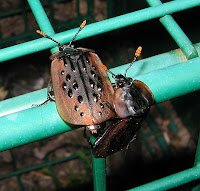 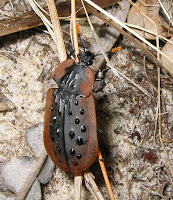 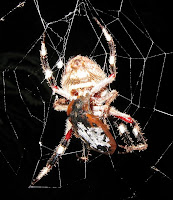 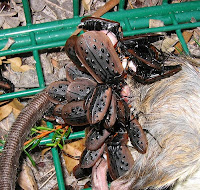 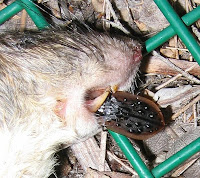 
From the family Silphidae, these are the vultures of the insect world, but instead of using sight to locate dead animals, they use scent. There are three Ptomaphila species in Australia with P. lacrymosa occupying the southern portion of the continent. This beetle is quite large, growing to 3 cm (over 1") in length and feeds not only on carrion, but living maggots too, so is very beneficial in maintaining a clean environment and reducing the risk of disease.

Largely active at night, it rests by day under the carcass, rocks, logs, etc, but like many night flying insects can be attracted to bright lights. However, these are usually odd animals as most will be found on the actual corpse, where they can be quite numerous. Bright lights are not the only problem encountered by flying Carrion Beetles, as some large enterprising Orb-weaving Spiders will build a web across their downwind flight path.

One of the features of this beetle is the flexible abdomen thus giving it great manoeuvrability as it climbs and battles for position when plying its trade. Despite its unsavoury habit, it is an attractive beetle and poses no threat to humans.

Posted by William Archer at 4:43 PM