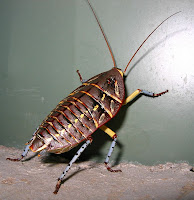 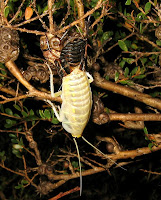 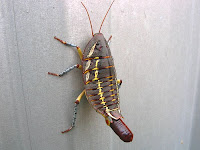 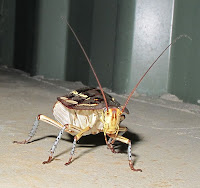 Despite a multitude of disparaging remarks about cockroaches made daily, some are remarkably beautiful. These include many Australian species and in particular Polyzosteria mitchelli, which I would love to invade my house, but unfortunately they are just not interested, preferring a life in the bush.

Polyzosteria mitchelli belongs to the Blattidae family (one of four cockroach families) along with 218 species in 20 genera (Australian Faunal Directory). The genus Polyzosteria from the same source has 15 species with many also very colourful. However Polyzosteria mitchelli would have to be one of the most striking with its brilliant color combination. It is mainly recorded from the semi-arid areas of WA, SA and NSW, where always a delight to encounter.

I have found it (usually on shrubby vegetation) from coastal heath to inland mallee flora, including saltlakes and granite outcrops, so although not common, it is very widespread. Growing to 5 cm (2”) in length, it is quite stout and not very fast when compared to the troublesome introduced species that commonly invade houses. The local forms have a bronze background colouration, but apparently metallic green shades have been found in SA.

Female cockroaches produce an ootheca, a blunt protruding seedlike capsule that contain her fertilised eggs. This she will carry around for some time until she finds a suitable place to leave it, where hopefully the young will emerge to pursue an independent existence. Polyzosteria mitchelli can be encountered anytime during the warmer months and although active during the day, often wander around on the ground at night. They are usually solitary and generally only come together to mate.

Posted by William Archer at 6:12 PM