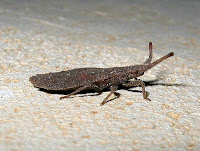 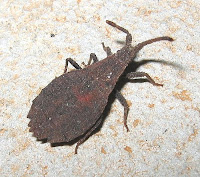 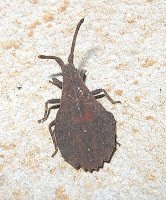 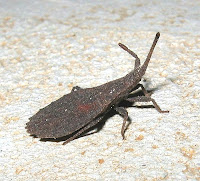 
The genus Agriopocoris is a member of the Coreidae family along with such notables as the Clown Bug ( Insects - Bugs - Clown ) and a number of agricultural pests that cause spotting on soft edible fruits. However these wingless Australian species and the Clown Bug, plus others, restrict themselves to feeding on indigenous plants and are therefore no cause for alarm from commercial growers.

There are four species of Wingless Coreid Bug listed by the Australian Faunal Directory, of which two are to be found in the Esperance region, namely Agriopocoris dollingi and Agriopocoris froggatti, so presumably the individual shown above is one of these. Like all Bugs, they are equipped with modified mouth parts to penetrate and suck up the sap of plants, or in some instances like Assassin Bugs, the blood and soft tissues of animals. However the bugs in Coreidae are all sap suckers and many are highly specialised and restricted to specific host plants.

The bug above lives mainly in the soil or under leaf-litter, climbing plants like Acacia (Wattles) and eucalypts on which they feed. The adults appear like the nymphs of other coreids, but they remain wingless throughout their lives. The photographed specimen was around 1 cm (3/8") in length, which is apparently the norm for these insects, thus with their small size and secretive nature, it is not surprising they are seldom encountered.
Posted by William Archer at 5:22 PM