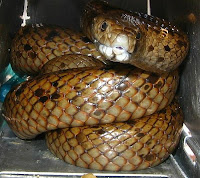 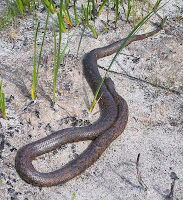 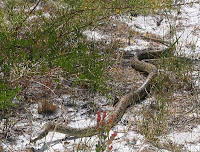 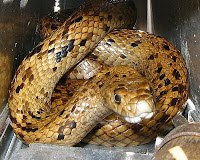 The largest venomous snake in the Esperance region, growing to 2 metres in length. As the frog eating tiger snake is most common around low-lying swampy areas, the Dugite is more frequently found in elevated sandy areas in search of their favourite prey, ie small mammals. The larger snakes check out the bush rat burrows and will over-winter in them too, the smaller ones are very keen on the introduce house mice and are often attracted to human habitation because of them. Dugites have long slender bodies and a similar diameter head; this allows them to get down the smallest of rodent holes.

Dugites like most snakes will eat other vertebrates like frogs and lizards, but mammals are their speciality. These snakes belong to the Brown Snake Group, many of which are highly venomous and should not be interfered with as they account for over 50% of Australia's snakebite fatalities. However, I have always found the Dugites to be very shy and not at all aggressive, but they are extremely fast and very likely to get a bite in if attacked or handled, so for your own good, leave them alone to go about their business and they will not bother you.

The local color form is a golden to a dark brown with scattered black flecks over the body. I also found one mature animal with a dark chocolate head, but most are as described. In other areas, the coloration can be dark brown to black, with or without darker flecks. Easiest way to identify the Dugite is by the long sleek body and smallish head, plus being very fast with relatively little sideway movement. Around Esperance it is mainly active during the day and is commonly seen during spring and early summer.
Posted by William Archer at 12:45 PM