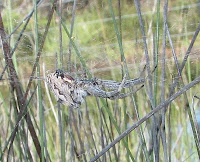 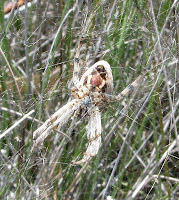 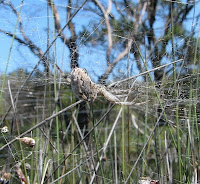 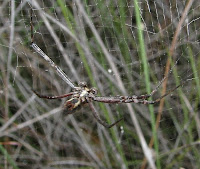 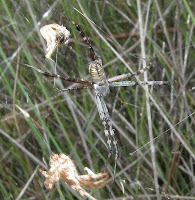 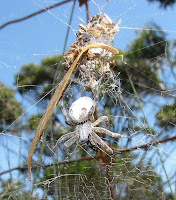 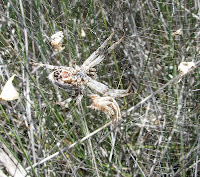 A spider better known for its web than the spider itself and despite the webs complexity, it is acually made by an orb-weaver. Commonly built within a metre (3') from the ground, the main orb (as it invariably comprises a network of them) is drawn up to a peak to form a tent-like structure. The peak is decorated with debris, often including a dried leaf, making a reasonably weatherproof retreat for the spider. As additional support for this structure, there are a multitude of supporting threads forming a very tangled surrounding framework, making access from predators and photographers alike extremely difficult.

The female's body length (excluding legs) is around 1.5 cm (1/2") and the male is less than half that size. There is a communal northern Cyrtophora species that forms very large webs to include many individual spiders of both sexes, but Cyrtophora cylindroides only has a single female, although more than one male can usually be found somewhere within or on the edge of this tangled orb-web complex. However the male having a small body with fine legs can be difficult to spot.

Currently there are less than ten Cyrtophora species recorded for Australia, with WA having only two comprising this species and the northern communal one Cyrtophora moluccensis. However Araneidae, the family of which Cyrtophora is a member, has over 30 genera and approaching 300 species.
Posted by William Archer at 6:17 PM