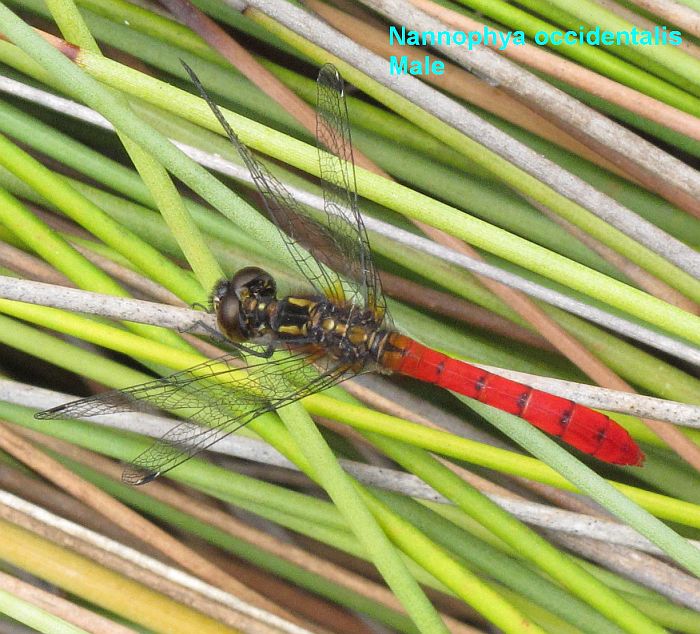 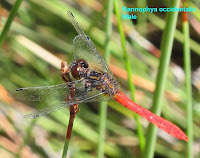 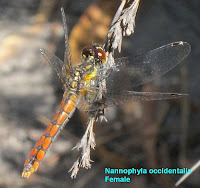 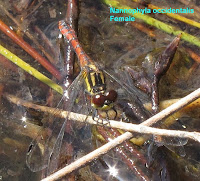 
Nannophya occidentalis is a member of the Libellulidae family that includes the Percher Dragonflies, of which the males of several species are also coloured bright red. The Western Pygmyfly is however much smaller, with males being around 2 cm (3/4”) in length and the females smaller again. Despite its small stature, the male stands out brightly by it iridescent red abdomen that literally glows. The female is a not an unattractive orange brown, but pales in comparison.

This dragonfly favours shallow permanently inundated freshwater swamps, where it can occur in large numbers. Competing males often take up positions within a few feet of each other, where they perch for lengthy periods whilst waiting for visiting females, who like many of this gender spend much of their time well away from the water and male harassment.

The Western Pygmyfly only occurs in southwestern near coastal regions of WA, but a similar looking species Nannophya dalei the Eastern Pygmyfly, can be found in much the same habitat from SA to northern NSW. Despite their smaller size, which immediately distinguishes them from other Perching Dragonflies, both Eastern and Western Pygmyflies have on top of the abdomen a dark mid-dorsal stripe. With the Eastern male, segments 1-3 and sometimes more are marked, whilst the Western species only the first and rarely the second segment are marked.

Posted by William Archer at 6:13 PM