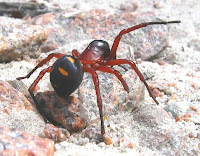 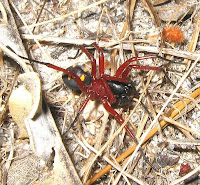 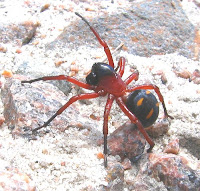 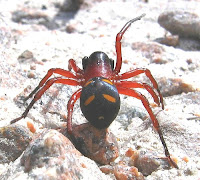 
The Zodariidae family has 19 genera and the Storena genus over 40 Australian species with 9 listed for Western Australia, so quite a large group. The spider shown here has a lot in common with Storena formosa that occurs in several States including WA, however I do not possess the information to accurately determine if it is. These spiders are distinctive by the front part of their carapace, which is near vertical, very high and looking like the spider is wearing a helmet. Many species, particularly the smaller black ones, hang around ants nests, with some being very good ant mimics.

These spiders do not construct webs (apart from the female building a silken retreat to brood her eggs), but actively hunt their prey on the ground and usually at night. During the day they conceal themselves under leaf-litter, logs and rocks and some species will even dig a burrow. However one the females above was encountered crossing a track on a bright sunny day at 11 o'clock in the morning. The bright orange markings probably served as a warning to predators that she was dangerous and to leave her alone, which the birds certainly did. It is not known how toxic the venom of these spiders are to humans, but with most spiders it is best to leave them alone, particularly if brightly colored.

The female above was close to 2 cm (3/4") in length excluding legs (one of the larger species), whilst the male was a little shorter but more than made up for the shortcoming by the length of its boxing glove like palps.
Posted by William Archer at 7:22 PM