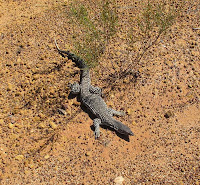 
Gould's Sand Monitor or Sand Goanna is by far the most widespread monitor species, being found in all States except Tasmania. However it is rarely encountered in the Esperance region and seldom seen within 100 km (60 miles) of the South Coast, with the above being around 90 km. There are two subspecies, with Varanus gouldii flavirufus occupying most of central Australia, whilst Varanus gouldii gouldii mostly inhabiting the outer (less central) regions and would be the local (darker) subspecies.

Locally and immediately south of the Gould’s Sand Monitor's territory is the area occupied by the Southern Heath Monitor, Varanus rosenbergi (see here), which is slightly smaller, growing to 1.3 metres (4’6”) in total length, whereas Gould’s can reach 1.6 metres (5’6”), although may never reach this size in some regions. The photographed one above was around 1.1 metres (3’6”) in total length.

At first glance these two monitors look much the same, but they differ in several ways, the most obvious being the white to cream unmarked tail tip of Gould’s Monitor, but is darkly marked in the Heath Monitor. Another feature is the dark stripe behind the eye, which is pale-edged with Gould’s, but not with the Heath Monitor. I have included a photo of the Southern Heath Monitor for comparison; this animal is from the same area, but 20 km (12 miles) further south and is of similar age (adolescent).

Posted by William Archer at 5:06 PM