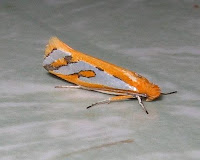 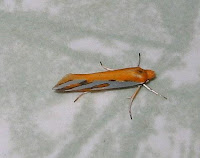 These are called Twig Moths, as the caterpillars pupate without a cocoon but disguise themselves by attaching their enlarged rear end to a twig, whilst their motionless metamorphosing body is held in an elevated position, thereby appearing like a small branching twig. The caterpillar protects itself from predators by constructing a small silken retreat on the leaves from which it is feeds.

Australia wide, there are around 50 species in this moths family (Hypertrophidae) and all tend to be on the small size, with this species being little more than a centimetre (around 1/2") in length, but what it lacks in size is more than compensated by the impressive metallic silver and orange coloring.

The larvae of this Thudaca species is thought to feed on Leptospermum (Tea-tree) of which only one small species (L. spinescens) is widespread in the region, although the much larger and invasive introduced shrub L. laevigatum from the Eastern States, is becoming common along roadsides. The above moth was recorded locally during the month of July.
Posted by William Archer at 4:40 PM