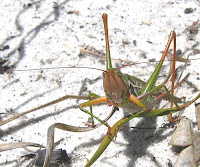 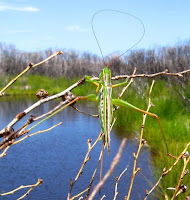 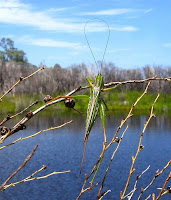 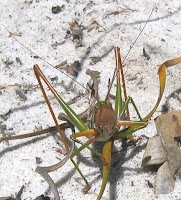 The Metaballus genus currently comprises 10 species and is another group of katydids from the large Tettigoniidae family. Those shown above are likely to be the more common species of the Esperance region, namely Metaballus frontallis the Common Marauding Katydid, but a specimen is required to be sure (I thank Dr David Rentz for the genus identification).

I am not sure how members of this group acquired the name of Marauding Katydids, although besides feeding on vegetation like most katydids, they will expand their diet by killing and eating other insects, so may well plunder available resources. Another meaning for Marauding is Predatory that would fit this katydids habits very well. Interestingly, this group is also known for practising mate selection role-reversal, where in certain situations, the females will compete with each other for a male with better genes or a gift of the nutritious male spermatophylax (a glutinous product of the male's reproductive glands that the females eat and being better nourished can lay more and healthier eggs).

Mate selection is quite interesting with these katydids and much has been written about them. Apparently, when the male Metaballus calls, a female can tell whether he is well nourished and healthy by the length of the silence between calls. Sub-standard males have longer silences between calls than alpha males, who the females select in preference, this is obviously the female doing the choosing (unless there is an abundance of females). The Role-reversal happens when there is a shortage of nutrition, then the females will compete for the male's spermatophylaxes, the male will then decide which female he will gift it and then mate with. In this he will tend to choose the larger female as she will produce more eggs. The male is apparently quite particular in his choice of mate, as he has literally invested a considerable amount of himself to ensure his genes are perpetuated (something like 25% of his body weight gos into producing the spermatophylax).

Metaballus frontallis is a widespread species occurring in sandy heathland along the south coast of Western Australia. They are normally active during daylight hours and found in the warmer months from late spring to early autumn.
Posted by William Archer at 7:46 PM