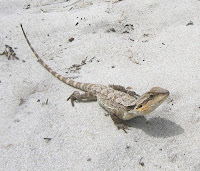 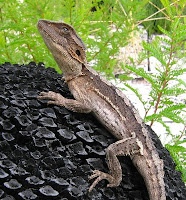 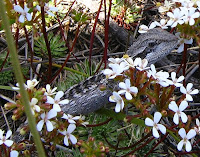 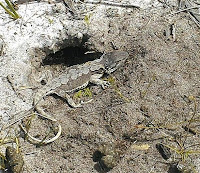 
Often seen in spring and early summer atop elevated positions in order to sunbake and overlook their territory to spot potential mates or competitors. They grow to a little over 15" (380 mm overall length) and if approached slowly and quietly, will often remain motionless, hoping you can't see them due to their camouflage. But make a sudden movement and they will disappear in a flash, being very quick off the mark and able to rapidly sprint for cover.

The female dwarf bearded dragon is often found digging an extensive hole during the Christmas/New Year period, in order to lay her eggs that are covered with sand when finished. These lizards will eat a wide range of items from vertebrates and invertebrates to foliage, fruit and flowers, so they rarely go hungry.

To id this dragon lizard from others (as several have similar markings and coloration), note the single line of spines running down its flanks, other dragons either have two or more rows, or none at all. For more information about this lizard see:
http://natureitems.blogspot.com/search/label/35.%20%20Western%20Bearded%20Dragon
Posted by William Archer at 5:17 PM