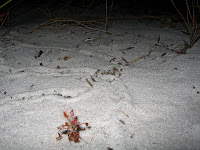 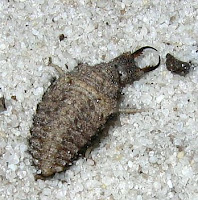 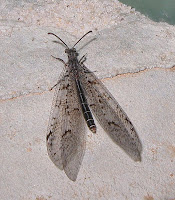 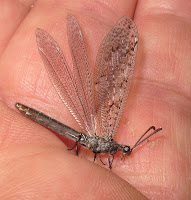 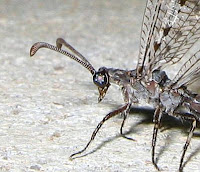 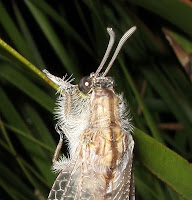 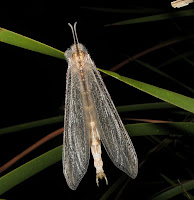 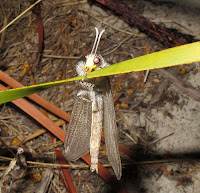 From the Lacewing order Neuroptera, those in the family Myrmeleontidae are commonly known as Antlions, due to their larvae burying themselves in dry soil (forming small round pits or depressed snail-like tracks) to grasp any passing ant or small insect, with their large body-fluid sucking mandibles. To ensure capture, they will flick fine grains at their intended prey to make them slip further into the pit and into their waiting jaws.

The nocturnal flying adults are easily recognised by their curved (hockey-stick shaped) antennae and are commonly found in lower rainfall regions or where there are plenty of overhangs, particularly rocks that will shelter the larval pit traps from rain. These conditions obviously provide the Antlion/Lacewing with a considerable amount of suitable habitat within Australia, making them the most common lacewing group with over 250 known species.

Above are two distinct species, a long haired one that grows to around 4 cm in body length from the subfamily Acanthaclisinae, and a shorter haired one that is around 2.5 cm in length from the Myrmeleontinae subfamily. The larvae of both are very similar in shape requiring microscopic examination to determine more subtle differences, but both are very common in the fine white sandy soil that typifies the Banksia speciosa heath east of Esperance.

Insectivorous bats would be a major predator of these night flying insects and when at rest, frogs and large spiders would also consume numbers but apart from these, Lacewings have relatively few predators. The adults are most active during the warmer months from December to February, particularly on calm, warm and humid evenings.
Posted by William Archer at 6:25 PM