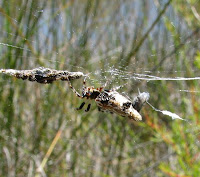 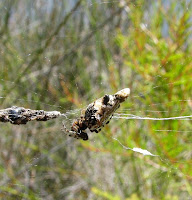 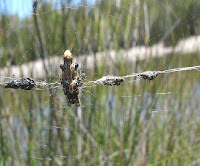 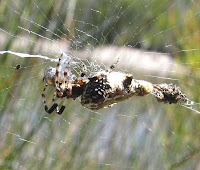 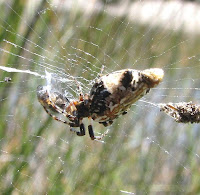 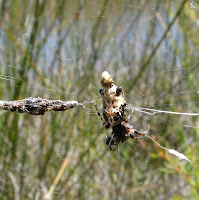 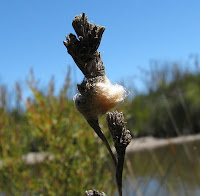 An unusual small spider, no more than 1 cm (3/8") overall length, with a relatively long fat abdomen (as long as the rest of the spider including its legs), plus with two side appendages. It makes a small circular orb web where it constructs from several threads, a horizontal line across it from which it hangs insect debris (hence the common name). The spider whose outline is broken by its unusual shape, sits between the garbage and appears to be just another piece of it and is thereby disguised from predators.

Whilst taking close-up photos of the spider, a pesky little bushfly fell into the web, where upon the spider made a leisurely stroll to it, quickly disentangled it from the web, then matter of factly carried it back to the web center, where it was promptly wrapped in silk and bitten, or possibly re-bitten (if so then for much longer).

The habitat was near the summit of 1 metre (around 3') high sedge surrounding a small dam. I only encountered the single female, so presume they are not particularly common, although the area was burnt in a bushfire during the summer of 2005, so maybe early days for recolonisation. I encountered a small woolly egg-sac close by that matches the description given for those made by the garbage line spiders, so hopefully there may soon be more.
Posted by William Archer at 6:43 PM