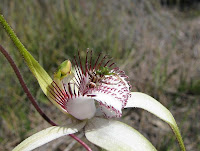 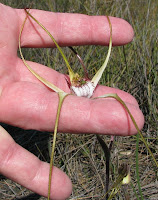 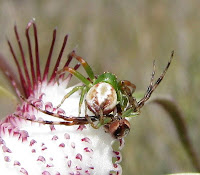 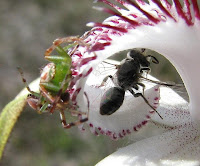 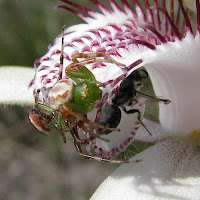 A large family of spiders with over 140 species in 27 genera and 3 sub-families. The Flower Spiders (also known as Crap Spiders due to the orientation of their legs, permitting them to move sideways) are generally small and colourful, with their front pair of legs very much longer than the latter pair. These are held out wide in preparation to grasp any insect prey that may alight on their flower, which they then subdue with a bite. They do not build a web, but lie in wait to ambush prey, in which they are aided by their bright colors that usually blend with the color of their flower.


Like the Flower Spider's prey, I did not at first notice them (in the photos above) and only saw the large Spider Orchid, Caladenia longicauda. It was not until they moved due to my handling of the flower did I spot them. A male and female Diaea species engaged in a little loving, were initially in the rolled orchid labellum along with a larger honey bee they had captured and stashed there, but my desire to get a photo with the orchid draped over my hand was not to their liking.

The flower spiders from the genus Diaea are usually no more than 1 cm (3/8") in body length, although their legs, particularly the front ones, will easily triple this dimension. There are around 40 Flower Spider species in Australia, of which 8 are recorded for WA. They are not known to be harmful or aggressive to humans and usually drop from the flower when disturbed.

Posted by William Archer at 5:18 PM