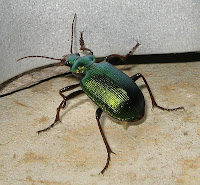 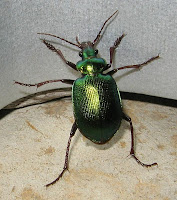 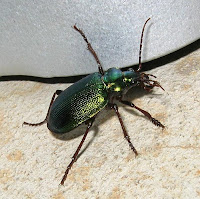 Calosoma is a small genus in the large Carabidae family that has over 2500 Australian species. Calosoma schayeri is a handsome metallic green beetle with sweeping curves and legs built for running; it has a distribution almost Australia wide, the very top end being the exception. In places when attracted to bright lights, they can visit in vast numbers to become a nuisance, but they are otherwise mostly beneficial by preying on pest caterpillars and grubs, both above and below ground. The Green Carab Beetle has a sizeable pair of mandibles that not only readily catch and dispatch prey, but can also be used in defence, although in that regards they have something much better, a foul smelling fluid they can squirt from their rear end. So if you are looking closely at one and it lifts its backside to you, it might be time to make your exit.

Growing between 2-3 cm (1") it is usually only seen at night when attracted to house lights, not particularly common locally, but personally noted for the months of October, November and April.

Posted by William Archer at 7:09 PM