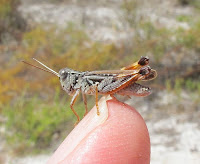 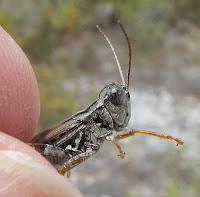 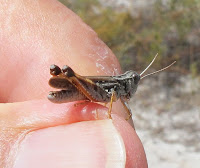 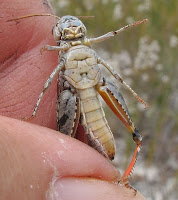 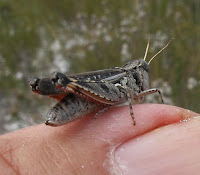 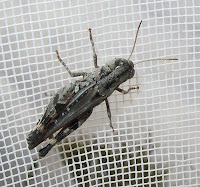 
Like most grasshoppers, Genus Novum 95, ochracea is part of the large Acrididae family, which includes the insects most people think of as a grasshopper. However to the people who study these animals there are many differences and this species and at least 17 others (16 undescribed) belong in a new genus, hence the temporary Genus Novum 95 classification. This species named ochracea, was probably allotted to a different genus, but is now in the process of being relocated.

When encountered this particular grasshopper can be very common, apparently favouring sandy open spaces even when there is little herbaceous vegetation from which to feed. The ones photographed above were very common in the calcareous tertiary dune system around Esperance, but I have also seen them elsewhere in non-calcareous heathland. They are recorded in the outback regions of Victoria, NSW, Qld, NT, WA and SA, the latter two States also along the coast, except in the higher rainfall districts.

The Common Red-leg Grasshopper is around 2 cm (3/4”) in length and as its name suggests has striking red markings on the inside of the leg. This is a distinctive feature and when combined with the shape of the paraglossae (wedge-like projection in the neck region) separates this species from other similar looking grasshoppers in Genus Novum 95.

My thanks to Dr David Rentz for identification and his (plus Lewis, Su and Upton) book titled A Guide to Australian Grasshoppers and Locusts.

Posted by William Archer at 3:52 PM