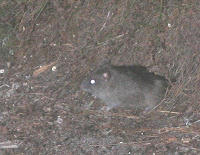 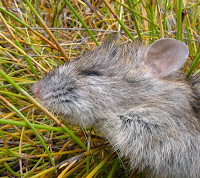 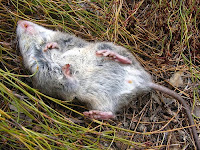 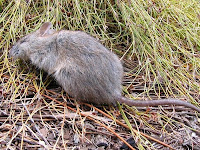 
Coastal heath is this attractive rats preferred habit where it builds a network of tunnels to nest and breed, suitable rocky habitat with deep recesses are also colonised. A sandy mound of excavated sand is usually all that is seen of this animal as it is shy and almost exclusively nocturnal. Unlike the introduced Black Rat (mostly brown colored) it is not a good climber and usually will not invade houses, preferring its bush habitat.

The Bush Rat will eat insects, various types of vegetation and fungi. Consequently, and unlike the more carnivorous introduced rats, the Bush Rat is a very clean animal. It has attractive long soft fur giving it a chubby appearance and the tail is a little shorter than its head/body length (the introduced Black Rat, Rattus rattus by comparison has a very long tail of around 11/2 times the head/body length).

Bush Rats although once common have been drastically reduced from cat and fox predation. It is also preyed upon by the larger (to 2 metre) Dugite (snake) that will enter their tunnel network and even over-winter there too. Motor car engines are also not safe places for these rats, where the deceased one in some of the photographs above was accidentally killed.
Posted by William Archer at 4:16 PM