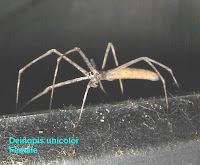 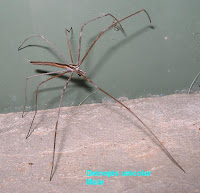 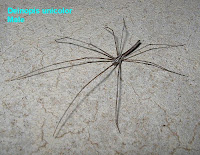 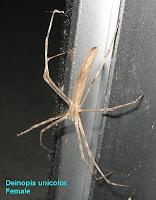 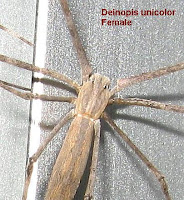 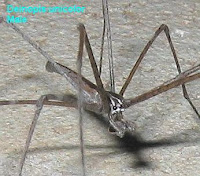 If you think you have seen a giant Daddy Long-legs Spider, then you have probably encountered a Net-casting Spider from the family Deinopidae, which for good reason is also known as the Ogre-faced Spider. In the Esperance region, there is only the one species, but in Queensland and NSW there are several. They use their long legs to hold open a small sticky silken, but stretchy net and when a flying insect comes within range, it quickly thrusts itself forward letting go of the expanded net in order to capture it.

With the local species the male is only slightly smaller than the female, but is slimmer and has longer legs. The female body length is around 2 cm (3/4") with the male slightly less, but the legs of the male (front and back) are close to 10 cm or 4" in overall length. These long legs give the spider a strange (running into the wind) locomotion as it holds itself well off the ground when on the move, to virtually glide on tip-toe with legs trailing, but with the femurs (thigh parts) remaining more or less horizontal.

These spiders only hunt at night, so in order to catch flying insects by actively ensnaring them, the Net-casting Spider has excellent eye-sight with two very large forward facing eyes, they also have six other eyes, but these are much smaller. Preferred habitat are rocks or something providing a solid background, with light intersecting vegetation where in a sheltered position, it can (whilst hanging down) lie in wait for passing prey that are funnelled along the vertical wall.

Deinopis unicolor is not particularly common where I am, which may just reflect the shortage of suitable habitat, but when they have been encountered, it has been from March to June.

Posted by William Archer at 4:32 PM