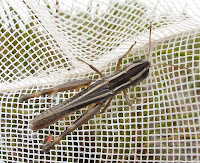 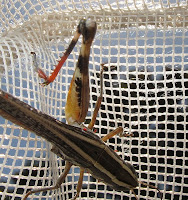 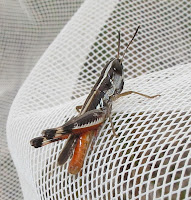 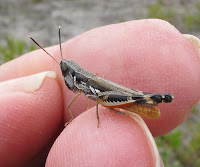 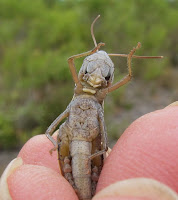 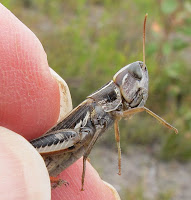 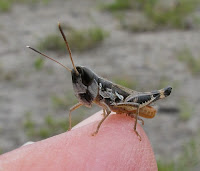 
The Common Macrotona is mainly found in NSW, Victoria, Tasmania and SA, with only a small occurrence in the NW Wheatbelt of the Moora/Mt Magnet area and to have this species now in the Esperance region would link their widely separate distribution locations. However, although this species is on casual observation very similar to Macrotona australis, examination of the genitalia is essential to be positive, hence the uncertainty. There are apparently 7 other described species in this genus, plus 33 undescribed ones.

Locally, the Common Macrotona is very common, found in both calcareous and non-calcareous sandy zones in an open shrubland containing a variety of vegetation, particularly herbaceous species. The coloration of the legs is very distinctive, as is the paraglossae (the wedge shape appendage in the neck region). The females are to 28 mm (1”) in length, whilst the males are recorded to only 18 mm (5/8”) in head/body size. The larger females have pronounced pale yellow stripes running from the head, along either side of the pronotum to join at the wing tips, but all observed males were much less prominently endowed.

My thanks to Dr D Rentz for his assistance, and ‘A Guide to the Australian Grasshoppers and Locusts’ by Rentz, Lewis, Su and Upton.

Posted by William Archer at 5:13 PM