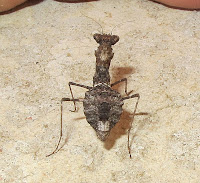 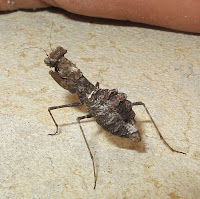 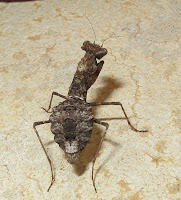 In Australia, Mantids (commonly known as Praying Mantids or as a Praying Mantis) belong to three families, the largest (Mantidae) having well over 100 species; contrasting with a north Queensland family with only a single species. Paraoxypilus laticollis belongs to Amorphoscelidae the third family, which has 28 species spread over 8 genera. The genus Paraoxypilus has 8 species with only one of these (Paraoxypilus laticollis), residing in the southern part of Western Australia. Surprisingly it is also found in the hot inland Lake Eyre Basin of South Australia and the Northern Territory, although it is possibly more widespread but not recorded, as the region is very remote and the Bark Mantid blends very well into its tree trunk habitat. Apart from a single north Queensland Paraoxypilus species (also found in neighbouring Papua New Guinea), Paraoxypilus mantids are endemic to Australia.

The larger mantids in the Mantidae family are common around Esperance, but personally, I have not seen many of these smaller Bark Mantids, particularly females, the males are more noticeable as they have wings and are occasionally attracted to house lights, although not often. Had not the wingless female wandered in one afternoon, I doubt I would have noticed her on a similar coloured and knobbly Banksia speciosa or Nuytsia floribunda trunk. The female was around 2 cm (3/4”) in length, but more than made up for her lack of size and absence of wings, by a rapid running action and would have disappeared had I not placed my hand in front of her, which only delayed her for a few moments before she took off again. The winged males are a little larger to about 2.5 cm (1”) in length and just sit on the flyscreen until they decide there are better places to be and fly away.

All mantids are carnivorous and mostly hunt their prey by waiting in ambush for an unsuspecting creature of a size capable of being overpowered, to pass by. Consequently, prey and type vary depending on the mantid size and development; likewise their coloration is often nondescript so they can be inconspicuous to prey and predators.
Posted by William Archer at 5:14 PM