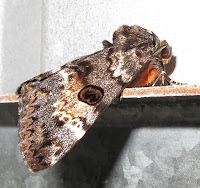 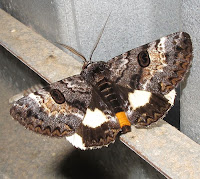 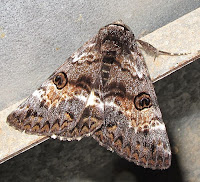 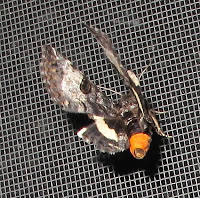 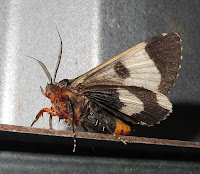 
This moth as the name suggests is quite spectacular with its vivid markings and orange body; the head/body length is around 3 cm (little over 1”) and can be seen locally during December and January. Apparently Donuca spectabilis is found throughout Australia (except Tasmania), although all references state the larvae feeds on the Golden Wreath Wattle, Acacia saligna, which many would know is a native of Western Australia, although widely planted as an ornamental and stock fodder tree. So if A. saligna is the only foodplant for the larvae, then presumedly Donuca spectabilis originated in WA. This group of moths is currently under review and this question hopefully will be resolved.

Noctuidae is a large moth family and well represented in Australia. The Australian Faunal Directory lists 428 genera with 1234 species (many being endemic), plus there are numbers of undescribed species. The genus Donuca currently has 6 species. As Acacia saligna (larvae food plant) is particularly common around Esperance, you would expect this moth to be also common, but if it is, then they are not attracted to house lights, as unfortunately only a few moths visit me each year. Perhaps the calcareous coastal belt where this wattle can be rampant, produces higher moth numbers than in non-calcareous heathland.

Posted by William Archer at 5:02 PM