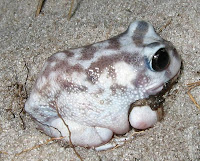 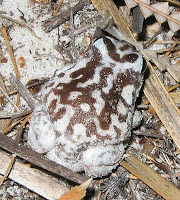 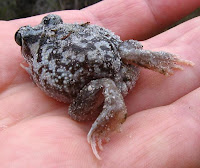 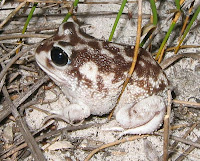 This frog visually can be very difficult tell apart from the Moaning Frog, Heleioporus eyrei as they appear to merge with some color forms of each species and the only sure method is their different calls. They also have a similar sturdy build with a thickset head. Size-wise (to 60 mm) they are also similar, although in this district the Moaning Frog is usually noticeably larger. The main markings of the Sand Frog are those shown above, where a pale colored marbling occurs on a darker brown background and the sides dotted white. The legs are also darkly colored. Preferred habitat appears to be the deep white sand in Banksia heath. Their call can be heard here: http://frogsaustralia.net.au/frogs/display.cfm?frog_id=31
Posted by William Archer at 3:47 PM