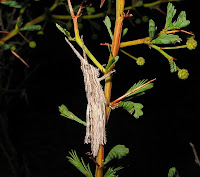 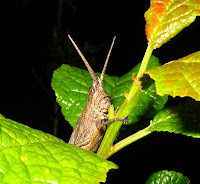 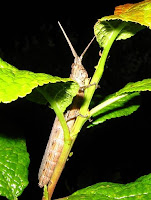 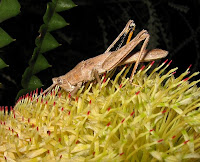 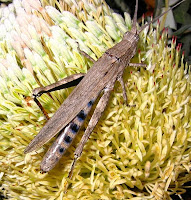 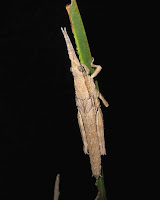 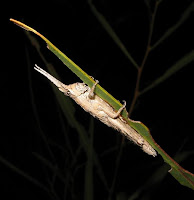 Coryphistes ruricola (kindly identified by Dr David Rentz) is very widespread and occurs in all States except Tasmania. It is convincingly camouflaged on rough barked trees, or amongst dead twigs and even possibly on dry Banksia cones, but sticks out like a sore thumb everywhere else. Growing to around 5 cm (2") in head/body length, it is attractively marbled in grey/brown markings, with short flattish antennae that is a species distinguishing feature.

The Australian Faunal Directory lists two other Coryphistes species, which are also widespread, but not in the Esperance region, making this grasshopper locally quite distinct. The most obvious rough barked trees in this district where this grasshopper can use its camouflage, is the Flat-top Yate, Eucalyptus occidentalis, and mature Banksia speciosa plants. However, many Bark-mimicking Grasshopper instars (juveniles) must be able to hide during the day in other locations, as they are often far from these plants and unlike the adults, lack wings to fly back. This is important as the Bark-mimicking Grasshoppers feed on a variety of low shrubs of which their bark-mimicking camouflage is of little use, particularly when feeding on colored flowers or green leaves. This they partly overcome by foraging mainly at night when there are fewer predators, plus probably use micro-habitats of dead vegetation on which to hide, where their camouflage can be put to better effect.

This grasshopper is reasonably common in heathland around Esperance and I have encountered them during spring and autumn, but not during hot summer or cold winter periods.
Posted by William Archer at 5:59 PM