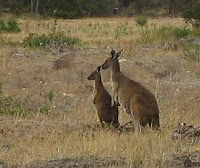 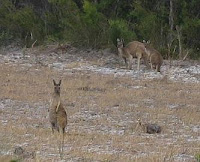 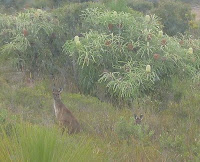 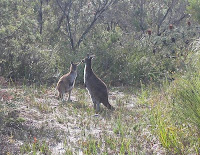 
This is the only kangaroo in this part of WA with males standing close to 2 metres in height, but the female much shorter. They are usually found in family groups, or a few juveniles together. They do not form big mobs like the Eastern Grey Kangaroo, Macropus giganteus, which may be the result of food availability. The Eastern Greys feed extensively on grasses, whereas the Western Greys tend to browse a range of fungi and vegetation and require larger areas for their requirements.


The mature males are called stinkers because of the odor they give off and either live by themselves or with a female and her offspring. Although this relationship may not be permanent, some last for several years with the male going off for periods to probably seek other females. The young remain with their mothers for 1-2 years, even when another joey is in the pouch. When they leave, they often team up with a similar aged kangaroo, or if there is a good food supply, with up to a dozen or so. These immature groups are quite fluid with them breaking up and reforming as environmental condition change. For more information about these marsupials see here: http://natureitems.blogspot.com/search/label/33.%20%20Western%20Grey%20Kangaroo
Posted by William Archer at 4:41 PM