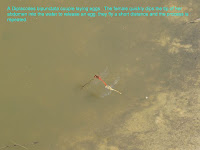 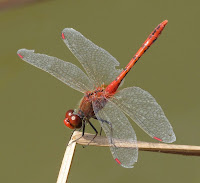 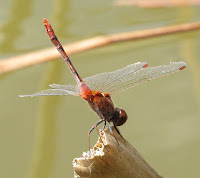 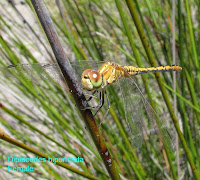 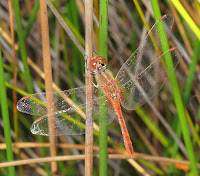 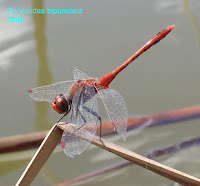 Diplacodes bipunctata is a member of the Libellulidae family and despite its flashy exotic appearance is widely distributed in Australia, New Zealand, Indonesia and numerous Pacific Islands. The males are a striking orange/red and have small black triangles spaced down their abdomen, whereas the females are yellow, also with similar black abdominal markings, plus a thin black mid-dorsel line.

Wandering Percher Dragonflies are around 3 cm (11/4”) in length and are quite common, although they tend to move around in groups so can be plentiful one day, but gone the next. They are called Perching Dragonflies, because that is what the male does by spending a considerable amount of time perched in a favourite spot whilst waiting for the females to arrive, which they also seem to do as a group. The males then become most active, not only mating on the wing, but are continually in flight guiding and protecting the female while she lays her eggs.

Wandering Percher females do not lay their eggs on aquatic vegetating like most other dragonflies, but hover with the male just above the water surface, where she quickly dips the tip of her abdomen to release an egg, then moving a short distance to repeat the procedure. They mostly place their eggs in shallow water and can be seen with other couples near the waters edge, or flying parallel to it, stopping at short intervals to drop another.

The distribution of a similar looking dragonfly, the Scarlet Percher Diplacodes haematodes is included for the Esperance region (The Complete Field Guide to Dragonflies of Australia by G. Theischinger and J. Hawking), where the male is also a bright orange/red, but lacks the black mid-dorsal markings. However, I have not as yet seen this species and have no idea how the female compares with the female Wandering Percher Dragonfly.
Posted by William Archer at 6:22 PM