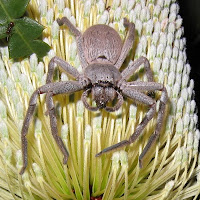 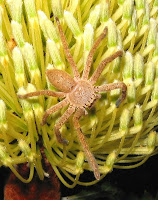 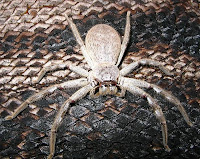 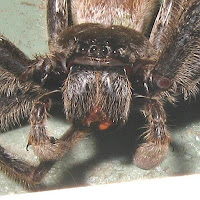 Huntsman Spiders are among the largest of Australia's arachnids, and have the dubious reputation of giving more people a heart stopping fright by their habit of entering houses and turning up unexpectedly. However, thankfully they are not aggressive and quite harmless to people, although if provoked can give a painful bite.

The classification of many spider groups have or are being revised, with the details being only available in scientific journals that I do not have access. So I shall not attempt to name these spiders, other than to say they are commonly known as Huntsman Spiders. The last time I looked there were something like 160 species in 20 genera, although I know this has now changed, but it does illustrate that there are a considerable number of them. These can vary in body length from 1 cm to 4.5 cm (3/8" to 2") and reach a 16 cm span (over 6"). They are excellent climbers and can scale vertical windows and scuttle upside down on ceilings with great agility. The species around Esperance are much smaller than the largest East Coast species, being little more than 10 cm (4") across.

Huntsman spiders do not build webs, but actively hunt at night and hide during the day behind bark or narrow recesses. As they can flatten their legs (laterigrade), they can move sideways and crawl into surprisingly narrow cracks. Due to their size and general hairy nature, these spiders are also called Tarantulas or Triantelopes, although a range of unrelated large spiders worldwide are called the same. Huntsman Spiders have 8 eyes in 2 reasonably straight rows. The four lower eyes are usually larger than the top four and closer together.

There are 2-3 Huntsman species in the photos above and probably only represent a small portion of the local species. There are 40 or so different ones recorded for WA, although in the more humid climate of Qld and NSW there would be many more. Apparently spider size is related to prey size and food availability. As NSW and Qld have a higher rainfall with a warm climate, they support more and larger invertebrates, thus producing larger spider predators.

Huntsman spiders can be quite social, with the male and female spending several days together, mating many times. Unlike most other spiders, the female huntsman is not aggressive to the male and usually makes no attempt to eat him.
Posted by William Archer at 6:33 PM