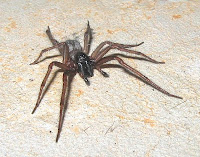 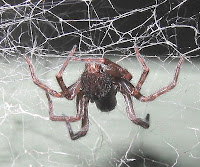 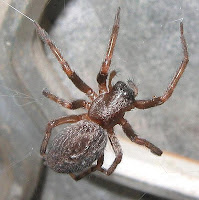 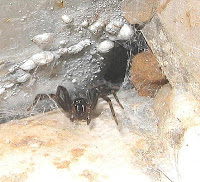 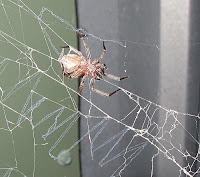 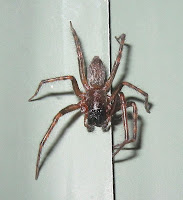 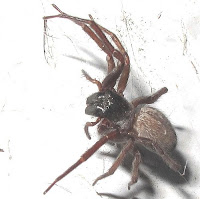 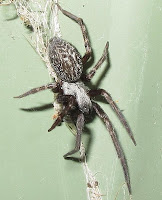 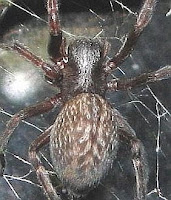 The genus Badumna belongs to the Desidae family, which may not be known to many, however most people are familiar with the hairy dark brown or black spiders that build an untidy web with a funnel leading to a retreat (usually under corrugated iron, holes in brickwork or timber). They are extremely common and probably every household have some. Generally referred to as Black House Spiders, there are actually several species that look very similar, particularly when young.

Badumna insignis (previously known as Ixeuticus robustus), is the Large House Spider and when fully grown has a body length of around 2 cm (3/4") and occurs Australia wide, including Esperance. I intend doing a separate post on this species at a later date. In the Eastern States a similar looking spider is the Small House Spider, Badumna longinqua (around 1 cm in body length or 3/8"), but this is replaced in Western Australia by another similar looking spider, Badumna microps. Just to complicate matters there is a third Australia wide species Badumna senilella, which completes those that may be illustrated above. However in the Eastern States there are even more species, so being too specific with species names is fraught with danger. Even the above photos probably represent at least two of the three local species.

Besides colonising peoples houses, these spiders also live in tree hollows and under rocky overhangs, or anywhere with a suitable sized hollow they can use as a retreat. Wanting to live with people, may be advantageous for them, by reducing the number of predators that prey upon them, because their survival rate is remarkably low. Other spiders like the White-tailed Spider (Lampona) and the Daddy-long-legs (Pholcidae), take a heavy toll, as do various wasps to feed their young. Birds will eagerly consume them and use their web to line their nests, even Ants will take a few or at least force them to exit quickly. Add to these frogs, reptiles, small mammals and various invertebrates and you begin to wonder how any manage to survive.

On calm mild evenings, these spiders can be found on the outer edge of their webs combing out with the rear legs a very fine, crimped, woolly silk in a zigzag pattern. This is a special highly elastic thread called cribellate silk, which is paired with this genus and used to securely ensnare prey when vibrated by the spider. Male spiders are smaller than females, but have longer legs and are often found wandering around at night looking for females.
Posted by William Archer at 8:03 PM