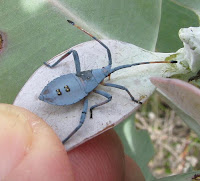 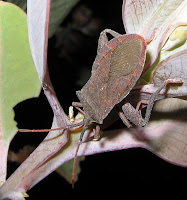 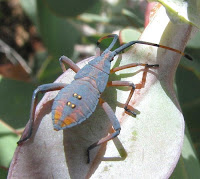 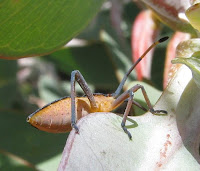 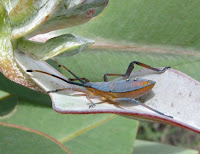 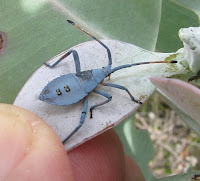 
The Clown Bug is named after the bright colors of the juveniles (instars), rather than anything to do with the adult bug. However this group of sap sucking insects are also known as Eucalyptus Tip Bugs (as they feed from young new leaves), Gumtree Bugs (as they mainly feed on eucalypts), Sap Sucking Bugs or Squash Bugs. Compared to the instars, the adults are quite drab, with their orange backs being covered by their adult wings. The young bugs probably have strong coloration to act as a deterrent to predators, which would not be false advertising, as many insects that feed on eucalypts concentrate the toxins within themselves to become highly distasteful or even poisonous.

The body length of the 4th instar is around 15 mm (5/8") in length, whilst the winged adult will be a little over 20 mm (around 3/4"). This particular species is not a fast mover and will usually only when disturbed, shuffle to the reverse of the leaf it occupies, but can if required, retaliate to an aggressor by releasing a deterrent pungent smelling liquid from either side of the body (between the 2nd and 3rd pair of legs). However Amorbus rubiginosus is quite laid-back and not aggressive providing it is approached slowly and carefully.


These Clown Bugs including the adults are very specific as to the plants they feed upon, which in southern Western Australia is Eucalyptus pleurocarpa (previously known as Eucalyptus tetragona, a name no longer applicable). However the range of this particular bug is greater than the range of this eucalypt, so presumably it must feed on other species, although probably not many and certainly not fruit trees or ornamentals (there are six other closely related eucalypt species in WA that would match this bugs distribution and may also be its host). Clown Bugs are quite widespread in Australia and this species can be encountered in all States except Tasmania and the dry/hot center of the country, and although different host plants are preyed upon, there are only seven widespread species noted as hosts and all of them are eucalypts or close relatives.

The adult bugs have well developed rear legs, particularly the femur (thigh), but its only purpose seems to be to encourage females to mate (apparently they prefer males with sturdy thighs). The males will extend their hind legs at right-angles to give the females a good look and of course, if they have not lost a leg in fights with other males, so much the better with a match more likely. This display probably indicates to the female the health and vigor of males for mating and reproductive purposes.
Posted by William Archer at 5:36 PM