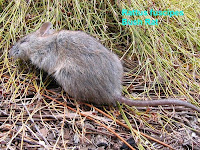 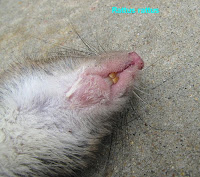 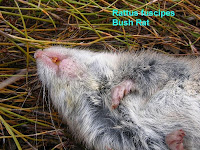 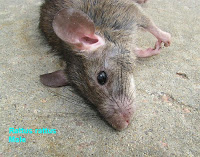 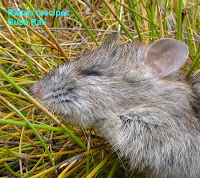 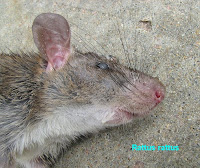 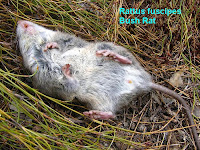 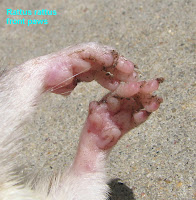 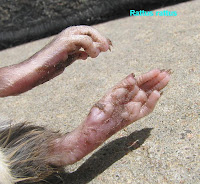 The Black Rat is an introduced species to Australia and a pest to people and wildlife. It is included here to help clarify the difference between it and one of our widespread indigenous rats, Rattus fuscipes the Bush Rat, of which it is often confused.

For a start, Black Rats are seldom black and are commonly colored grey/brown with cream underneath. This is not always the case as the coloration of this species can be quite variable, but from the ones I have seen in NSW, Victoria, Tasmania, SA and WA, the coloration above would by far be the most common. The coloration of the Australian Bush Rat is reasonably consistent, varying only slightly in lighter or darker shades of their fur. There is another similar colored introduced rat called the Brown Rat, Rattus norvegicus, but in Australia it is usually restricted to sewers and other man-made structures along waterways, so is less likely to be encountered in bush habitats, and unlike the Black Rat that is widespread around Australia and usually found within a 100 km or so of the coast.

The Black Rat is an excellent climber with fingers and toes that are able to firmly grasp things to aid it in this task. They use this ability to get into your roof, raid fruit trees and plunder birds nests. The native Bush Rats will rarely climb off the ground (apart from a succession of flat surfaces like rock ledges) and are not capable or interested in climbing more than a metre and only then if easy to do so.
There are many other differences between these rats, but these require a compliant animal for closer inspection, some of which may be seen by comparing the photos of each species above. The Black Rat is very intelligent and a highly destructive predator, feeding on just about anything it can get hold of (living or dead); the Bush Rat on the other hand is mainly vegetarian, although at times it will feed on some soft bodied insects. The only benefit of a Black Rat is they will kill and eat another introduced rodent, the smaller House Mouse, Mus musculus, but it will also prey heavily upon most small native animals (particularly their young) and have devastated wildlife throughout the world on many small off-shore islands. So if you catch one, it may look cute, but please don't let it go!

I should like to add that the native Bush Rat shown in some of the photographs above, was accidentally killed when it climbed into the engine compartment of my car. For more information about this rat, please refer to Mammals - Bush Rat

Posted by William Archer at 6:04 PM