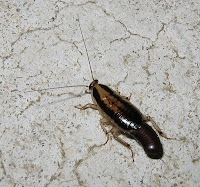 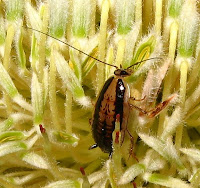 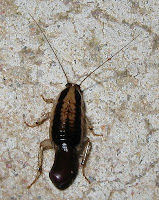 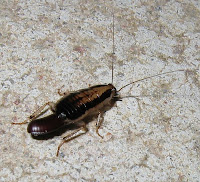 
The Tattooed Cockroach is a most unusual species and differs remarkably from others in the Esperance region. It is quite small being a little over 1 cm (1/2”) in head/body length and you would not be amiss to consider it a juvenile of one of the larger species, but the sighting of the odd shaped ootheca (egg case) would soon dispel that notion. The shape of the ootheca above is not restricted to the photographed individual, as I have a photo of another female with an identical one.

However, it is the tattoo-like markings on the back that are quite extraordinary and which are repeated on all individuals encountered. How such an elaborate patten could originate and for what reason is somewhat baffling, particularly when so artistically produced. I find it another little wonder that makes nature observation so rewarding.

This little gem of a cockroach, apart being found on the ground, is often encountered at night, feeding on fresh Banksia blooms at some height. The Tattooed Cockroach is not especially common in the Esperance Banksia heathland, but is regularly seen during the cooler months, although being small it would easily be overlooked in less contrasting habitats.

Posted by William Archer at 6:15 PM