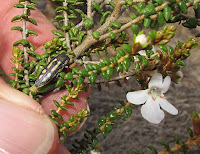 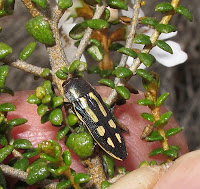 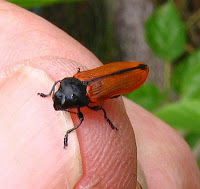 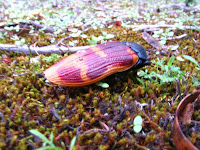 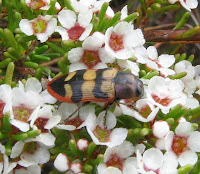 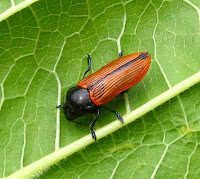 
Jewel Beetles from the Buprestidae family are also known as Metallic Wood-boring Beetles and are represented in Australia by nearly 80 genera with over 1200 species. They vary in size from 1.5-60 mm (1/16”-2 3/8”) in length (those above were between 1-2 cm or 3/8"-3/4") and whilst the adults feed on foliage, nectar, flowers, bark, etc., the larvae bore into trunks/roots/leaves of plants to leave a characteristic oval shaped hole.

These beetles are usually attractively coloured with various bright markings, of which their family name signifies (buprestidan – bright metallic lustre), but it is the tapering shape of their body coupled with short antennae that determines their classification. Similar looking beetles from other families have longer or club shaped antennae.

Despite their bright colouring, unless you look intently Jewel Beetles mostly go unnoticed, which particularly applies to myself, as I usually only find them when photographing plants of which they commonly pollinate. These beetles enjoy warm sunny weather and reach their greatest diversity in the tropics, but around Esperance are more frequently encountered in the inland mallee region, although the red one above and other species are common along the coast.

Further reading: A Guide to the Beetles of Australia by Hangay and Zborowski.

Posted by William Archer at 5:52 PM