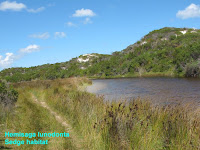 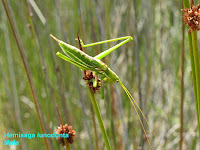 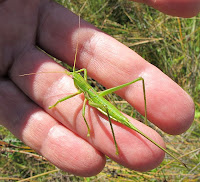 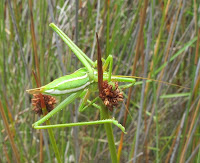 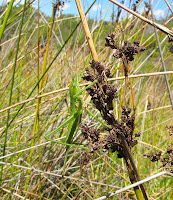 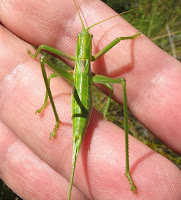 
Hemisaga lunodonta is a Katydid and therefore a member of the large Tettigonioidea family. It is a family with many subfamilies, of which Austrosaginae holds the Sluggish Katydids that are further divided into five genera. Although not difficult to separate species, they are to casual observation easily mistaken for each other, or even non-related Metaballus species, a predatory group (see http://esperancewildlife.blogspot.com/2009/08/marauding-katydid-metaballus-species.html).

The South Coast Sluggish Katydid can be distinguished from others, by its strong abdominal stripes and tubercles (small bumps) on the pronotum (top shield behind the head). There are other differences, but they are difficult to illustrate here. However the reference book ‘Tettigoniidae of Australia’ Volume 2 by Dr. David Rentz will answer most questions that are likely to be asked.

This species is recorded from the Nullarbor to the Stirling Range, making Esperance central to its distribution, however it is only recorded from a few coastal and near coastal locations, so is not particularly well known. The above were photographed from the outlet of Stockyard Creek (mostly blocked by a sandbar and only open after heavy rain), which is approximately 14 km (8.5 miles) east of Esperance.

The creek at this location has a narrow partly marshy section that is vegetated by round-leaf sedges on which Hemisaga lunodonta feeds (probably flowers and immature seeds), and only in this habitat have I seen this species. On most occasions I have visited at least one has been found, which likely indicates a healthy local population that probably extends further up the creek, although this area is inaccessible to anyone on foot. The surrounding dunes comprise dry calcareous sand, which are stabilised a little inland.

The first time I encountered these Katydids was when I was wading along the edge of the creek, checking out the local dragon and damselfly species. Three Katydids no more than 30 cm (12”) apart, were seemingly gesturing to me by waving their legs about from the top of the sedge and saying, hello, hello, hello as if rejoicing in the wonderment of life and keen to show it. However, I think their enthusiasm may have been abruptly cut short when the local White Faced Heron whose footprints I was following happened along next and no doubt also keen to sample life’s simple pleasures.

There is little gender size difference between adult Hemisaga lunodonta katydids, with both being around 3.5 cm (13/8") in head/body length, but the female has a very straight ovipositor also around 3.5 cm, which is probably used to lay her eggs deep in the sandy soil.  The lifespan of Hemisaga lunodonta spans the warmer months of the year from late spring to autumn, that is if they don’t get eaten first.  Although in their defence, they are well camouflaged as the in-situ photo above shows, because their strong white lines blend perfectly into their round stemmed habitat, so unless they move and catch the eye, are easily overlooked.

Posted by William Archer at 5:27 PM