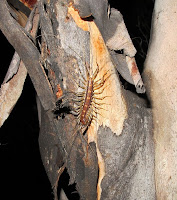 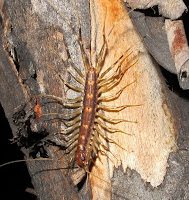 
Centipedes belong to the Class Chilopoda that has 5 Orders with the above species belonging to Scutigeromorpha. These orders are further divided into families (Scutigeridae for the above), genera and species, so are quite a large group of animals of around 3,000 species worldwide. However they are nowhere as numerous as the similar looking millipedes that have 15 Orders and species numbering in the tens of thousands.

This difference in species numbers between centipedes and millipedes likely relates to their diets, with the latter feeding on plant and dead animal matter that would be readily available, whereas centipedes are predators capturing and feeding on live prey that may not be so available therefore limiting their numbers. Both groups however have similar breathing systems that require moist humid conditions to function efficiently, so are less common in drier climates like Esperance and much more plentiful in tropical regions.

These Scutigeridae (2-3 cm or 1” long) centipedes are seldom seen locally, but in the Eastern States they have the introduced European House Centipede (Scutigera coleoptera) that enters houses to hunt spiders and insects. However the indigenous species above was encountered in remote mallee country 100 km (62 miles) NW of Esperance.

These House type centipedes differ from others by having much longer legs for speed, long antennae and functional eyes (most centipedes are either blind or have only rudimentary sight). Despite their wispy leggy appearance, these features help make these animals highly effective predators, giving prey little chance of escape. The exceptionally long antennae like appendages pointing upwards in the photographs are actually the rear pair of legs, the antennae are at the other end with the eyes.

Posted by William Archer at 8:23 PM