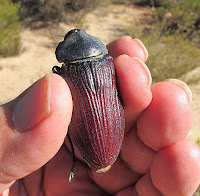 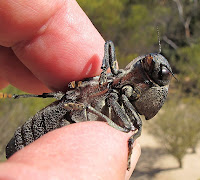 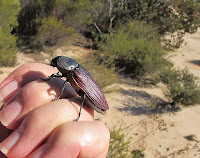 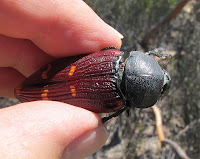 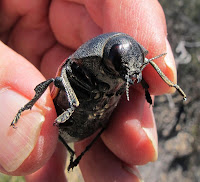 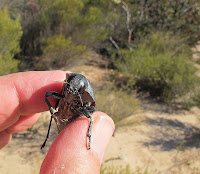 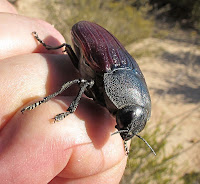 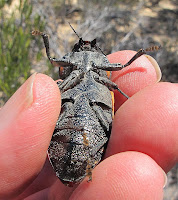 This is another of the large Jewel Beetles seen at a mass sighting near Lake Tay during February 2013, of which further details are available at http://esperancewildlife.blogspot.com.au/2013/05/temognatha-chevrolati-large-jewel.html and http://esperancewildlife.blogspot.com.au/2013/05/temognatha-heros-large-jewel-beetles.html.  This specific species was occasionally found in company with different species, but also encountered in small groups on their own.

The most interesting aspect of Temognatha stevensi was their temperament, which was aggressive and bombastic, and if there ever was a barrel chested beetle that won’t take crap from anyone, it would be this one.  This attitude was reinforced by a solid bite to fingers when they got in the way whilst trying to restrain them, hence my side grip.

Temognatha stevensi was also one of the larger beetles (5-6 cm or a little over 2” in length) and certainly the most robust that complimented their head down, bulldozing activity.  Some beetles had a couple of variable length yellow/orange stripes on each hardened forewing (elytron), although most did not, however all had a black head segment (pronotum) and a dark maroon body (elytra).

This species is mainly recorded from mallee environments to the south of Southern Cross (340 km or 210 miles ENE of Perth), but is also known from areas in western SA.

The 85 largely Australian species in the Temognatha genus, belong to Buprestidae the much larger worldwide Jewel Beetle family.


My thanks to Allen Sundholm OAM, who kindly brought my attention to the revised identity of this species, which was previously known as Temognatha duponti,

Posted by William Archer at 4:37 PM