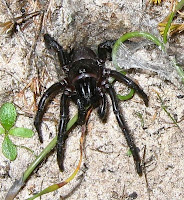 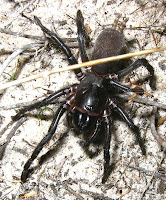 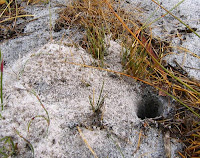 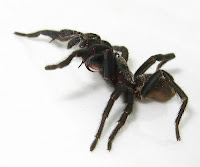 
Although appearing like a Funnel-web Spider it is not, but is often called a False Funnel-web Spider (True Funnel-web Spiders do not occur in WA). It is a common species of the Esperance region and can be found from low-lying areas around ephemeral swamps to the tops of sandy hillocks. This spider has been known as the Black Wishbone Spider, Aname diversicolor (even in recent WA museum literature), however from other reputable sources it is stated A. diversicolor is an Eastern States spider. Whatever the situation, there are over 30 Aname species in Australia and 5 of these are recorded from WA (4 exclusively).


In the photos above, the top four show female spiders, below them is a typical burrow, plus three male spiders, the latter commonly found wandering around at night in search of a mate. The females are solidly built and excluding the legs are around 30-40 mm (11/2") in length, the males are much smaller being about half her size, but with longer legs. They are readily identified as male, by the long palps (either side of the fangs) that appear like an additional pair of legs.

Besides the particularly long palps of the male, many male species have a spur on their front legs (see photos) that are used to prop-up the female's fangs during mating. This can be quite effective and some male spiders mate more than once, but when they reach sexual maturity after about 5 years, they virtually cease to feed and usually fall prey to the female or other predators as they gradually fail in strength. Although the bites of these spiders are not known to be life threatening, they can make you quite sick and with the considerable length of their fangs (see photos) they can inflict deep and nasty bites, followed by bacterial infection. So do not attempt to handle them.

Young females can sometimes be found on the surface during calm, humid spring nights in search of another location to construct a new burrow. This is a very risky activity for her and is probably only embarked upon by competion and or predator activity where she was. The burrows are quite extensive and require considerable energy to construct and unless prey is plentiful, in drier habitats it could mean a summer without food, as they will seal off the burrow's entrance to maintain life-providing humid conditions. From my observations, most do not make it.

These spiders are called Wishbone Spiders because they build a (wishbone) Y shaped burrow with only one open entrance, the other finishing just below the surface. It probably serves several purposes, but mostly I suspect to escape predators, like parasitic wasps and large centipedes.

If any arachnophobes have read so far, I should like to emphasise that unless you go looking for these spiders, then you are most unlikely to encounter them. If you are now thinking twice about visiting Esperance, then you should consider that you probably have similar spiders where you now live, but have never seen them.